I primarily use a Mac for everything I do (and by “primarily” I mean just about 99.9% of the time), and have for years. I’m not trying to start an argument over the best computer, I’m just saying I like the Mac. One of the main reasons I prefer Macs is that it’s Unix (based on Free BSD, since the creation of Mac OS X) without being too Unix-y. For many people I know and work with—great with computers but not a geek, it’s easy to appreciate the nice interface and reliability and features and so forth, without an awareness of the underlying Unix stuff. For me, who regularly works with Web servers, I can do anything on my personal computer just the same as I can on a Web server. When I develop projects on my computer, transferring them to a Web server is completely smooth process. But why is this post about MAMP Pro?

For years, Mac OS X was a 32-bit operating system with a 32-bit version of Apache included. When Mac OS X went to 64-bit, a couple of years back, it started including the 64-bit Apache, too. This caused some problems with PHP, because PHP wasn’t ready as a 64-bit version (or, more specifically, some of the libraries PHP uses weren’t 64-bit ready). Like many people on a Mac, I used Marc’s PHP installer to update my version of PHP, rather than build my own (with some exceptions, like when I wanted to play with PHP 6). So, for some time, it was challening getting PHP to play along nicely with Apache on Mac OS X (one option was to tell Mac OS X to run the 32-bit Apache by default). It’s at this time that I started using MAMP.

MAMP is a all-in-one MySQL, PHP, and Apache installer for Mac OS X (for Windows, XAMPP is the most common equivalent). In my opinion, there are three great things about MAMP:

Really, my only complaint is that MAMP doesn’t, by default, store the databases in a separate directory. If MAMP were to store the databases (MySQL and SQLite) elsewhere, upgrading the version of MAMP wouldn’t overwrite the existing databases. This isn’t a big problem, but would be a nice feature to use. (Conversely, it’s easy in MAMP to use a different directory for the Web files; I use the Sites folder in my home directory, which is more in keeping with the standard of not putting user files in /Applications.)

MAMP comes in a free version that I’ve been using, happily, for years. I’ve thought about upgrading to the Pro version off and on, but, when looking at the features, didn’t see the need. One feature MAMP Pro offers is the ability to use dynamic DNS to serve your sites from your computer, even if your IP address changes regularly (which is the case for most home access). This is not something I do or recommend others do (at the very least, it’s probably a violation of most ISP’s terms). But just the other day I needed a Web site to actually send out email, even while testing it on my computer. I came across a quick fix for MAMP (non-Pro) but that didn’t work for me. So I finally upgraded to MAMP Pro, which I really had intended to do by now anyway (as an act of supporting a product that I value that’s made available for free).

It turns out that I’m so glad I upgraded to MAMP Pro. The cost was $59 (US), which was slightly high, but not unreasonable. MAMP Pro is does not install a new or different version of Apache, PHP, or MySQL, it’s just a nicer interface to the MAMP installation. That may not sound significant, but the interface let’s you control MAMP more easily. For example, the basic MAMP interface looks like this, plus its moderate preferences panel: 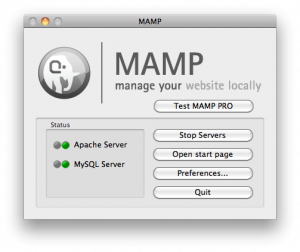 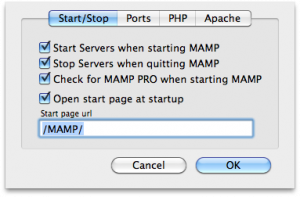 The MAMP Pro interface has many more options. The highlights are: 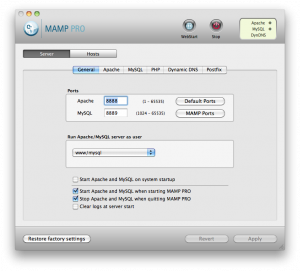 But what MAMP Pro does, which I was unaware of but appreciate most, is make it really easy to create virtual hosts. I’m frequently working on multiple Web sites at one time. With MAMP standard, to switch back and forth, I had to go into the MAMP panel and change the server directory, then restart MAMP. And when I went to look at another site, I had to repeat this process. With MAMP Pro I just create virtual hosts: somesite1 points to this directory; somesite2 points to this one, etc. Then I just go to http://somesite1:8888 in my Web browser or http://somesite2:8888, etc.

For each virtual host, I can also tweak the server settings: 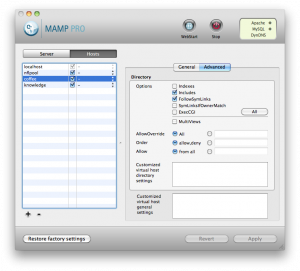 This is very useful and it makes me wish I had purchased MAMP Pro a long time ago (and no, I’m not getting paid by MAMP to say this; I have no relationship with them at all). To be clear, MAMP Pro is just a sophisticated interface and there’s nothing that MAMP Pro can do that you can’t do yourself by editing the proper configuration files, going into the command line, etc. These days, for me, I’d rather spend the $59 (US) and have something working the way I need it to, quickly and easily, then to spend a frustrating hour trying to get the right syntax to work in a configuration file.

I consider myself to be pretty cheap, preferring not to spend money if at all possible (my policy is: the money I don’t spend today is money I’ll have not to spend tomorrow). But sometimes it’s worth it to part with some cash. I just learned that MAMP Pro is one of those times.